This page:UHH > RDM > About us > Projects

Center for natural science (CeNak) and Central department for collections 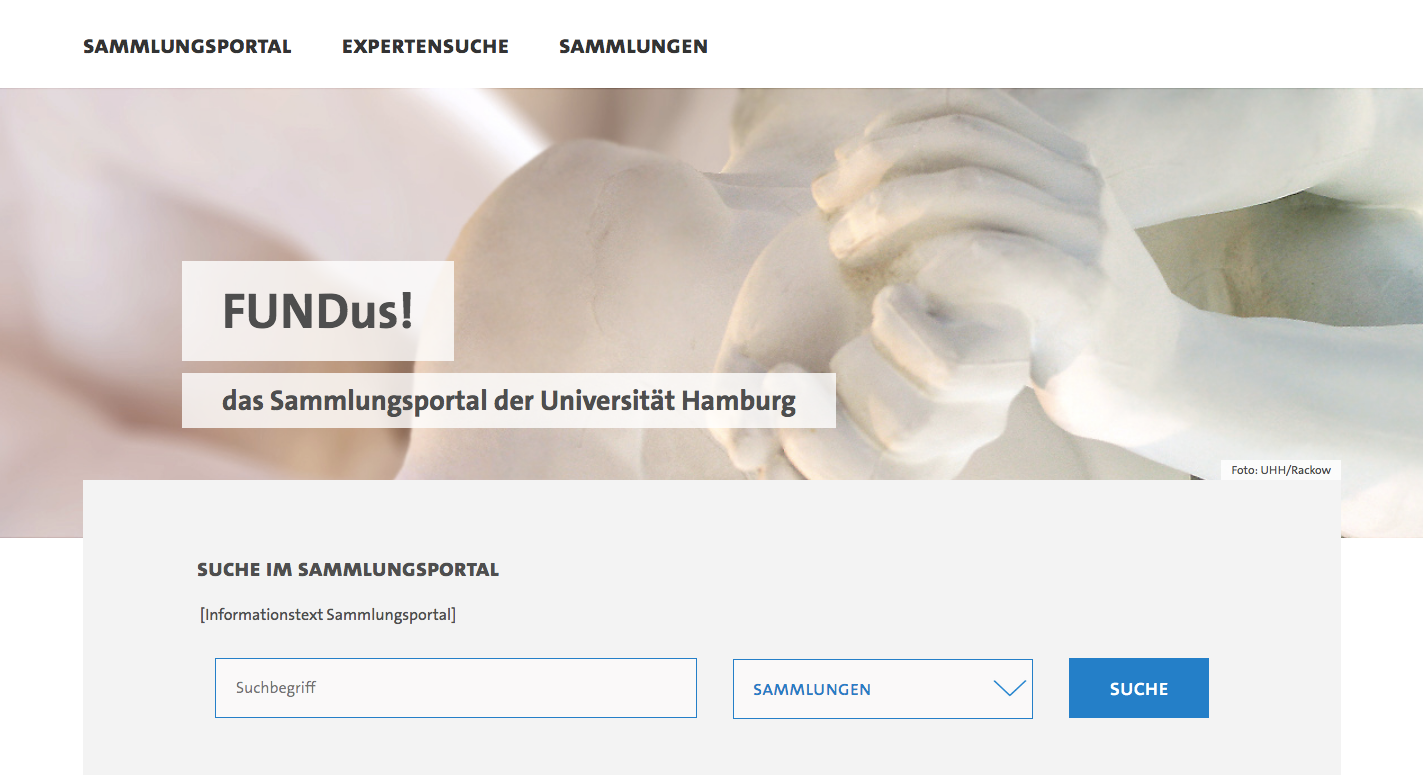 The FUNDus! collection-portal will give an overview of the collections of the university Hamburg. More than twelve million natural-scientific objects with a collectively high scientific value are owned by the group of the natural-scientific collections and museums of the university.
The gwin-project supports the Central department for collections and the Center for natural science (CeNak) in trying to make these unique resources available online for science and public. As part of a feasibility analysis, opportunities were determined and the metadata and digital copies of different collections were aggregated to improve the visibility and findability of the collections. 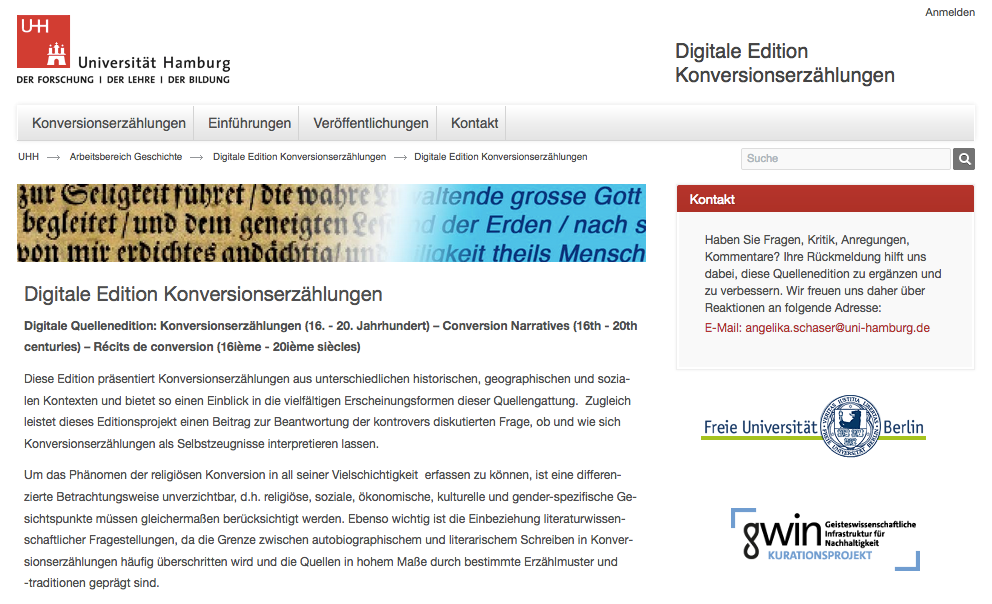 This edition presents conversion-narratives of different historical, geographical and social contexts and gives an insight into the diverse manifestations of this kind of source. At the same time, this edition-project contributes to the answer on the controversially discussed question, whether and how conversion-narratives can be interpreted as self-testimonial.

The digital edition of conversion-narratives with introduction-texts and glossary, which was developed by the DFG-Researchers-Group "Self-narratives in transcultural perspecitve", has been migrated in 2016 to the university Hamburg, supported by Christine Schatz and Iris Vogel (gwin). You can find the extended and revised edition in a new layout here. With the transfer of the edition into the gwin-research-infrastructure at the university of Hamburg, the permanent availability and potential expansion of this edition are ensured, after being threatened by the discontinuation of the user accounts at the university of Berlin.

As part of the migration into a MyCoRe-application, the layout and functionality of the edition were updated (responsive design of the university, dynamic linking and display of the glossary-entries) and thereby the usability was increased.

How To Learn Foreign Languages 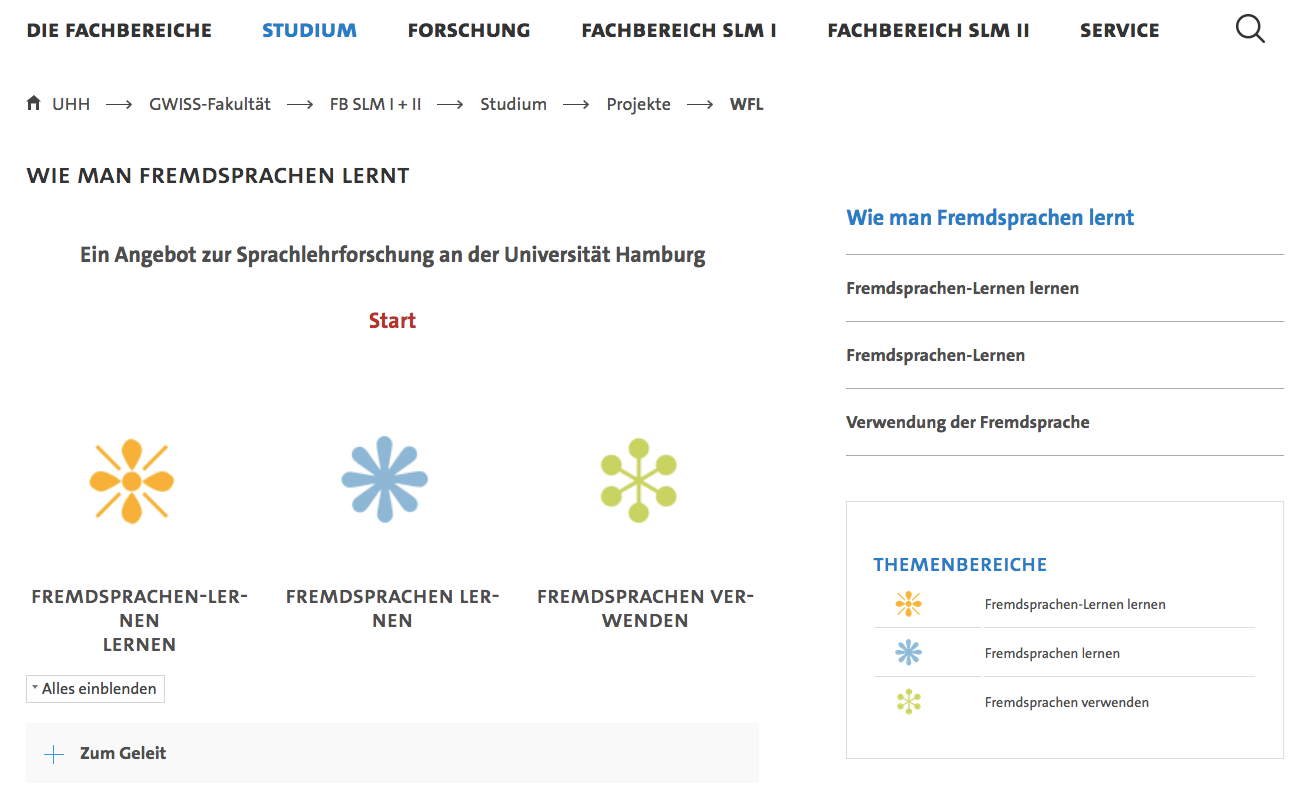 The collection is divided into three topics: 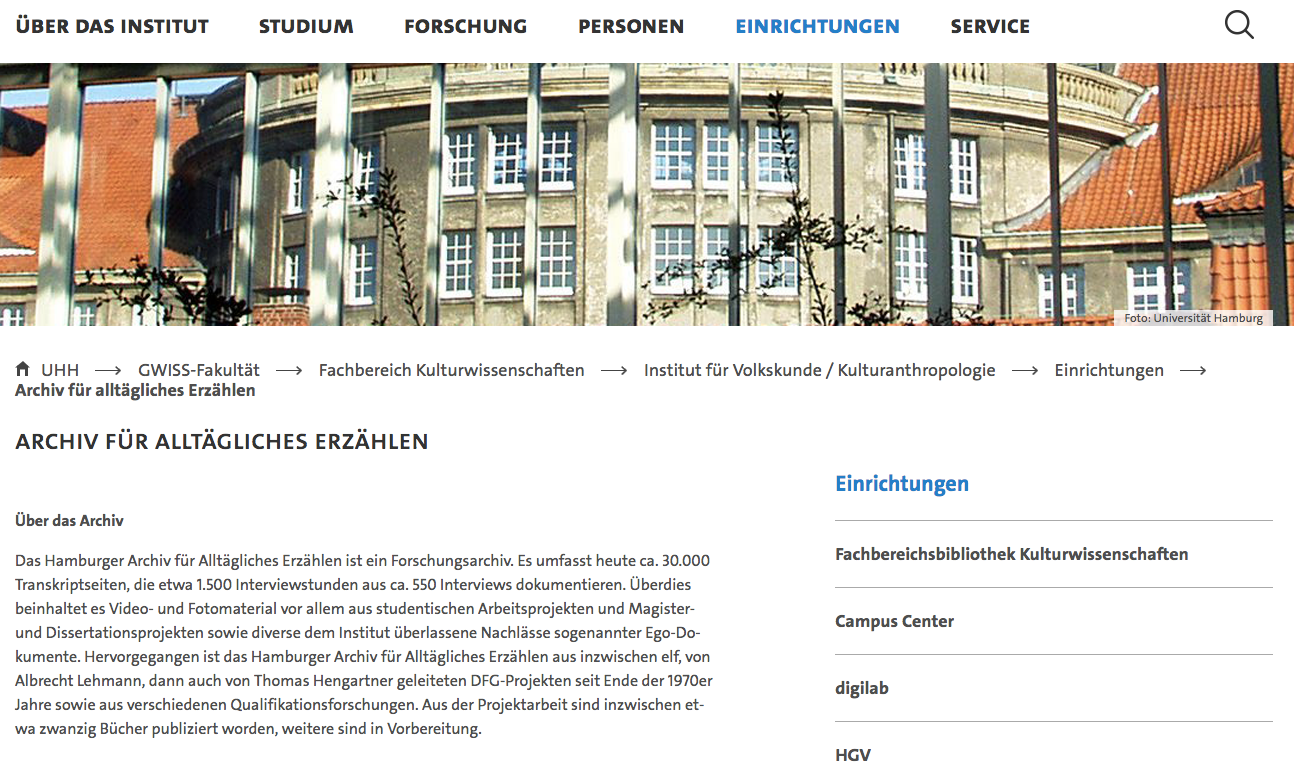 The archive of Hamburg for everyday-narrating is a research-archive. It contains about 30.000 transcript-pages that document ca. 1.500 hours of interviews from ca. 550 interviews. Additionally, it cntains video and photo footage, especially from student projects and master- and dissertation-projects, as well as miscellaneous inheritances of so-called Ego-Documents that were ceded to the institute.

In the first project stage, the data and the functionality of the webapplication Online Title List were transfered into the research-data-infrastructure of the University. The Indic Titles and Tibetan Titles were migrated into a MyCoRe-repository. In a further step, these will be enriched by the content of the Wiki and by the available digital-copies. The curation takes place in cooperation with the SFB 950 "Manuscript-cultures in Asia, Africa and Europe" of the University Hamburg 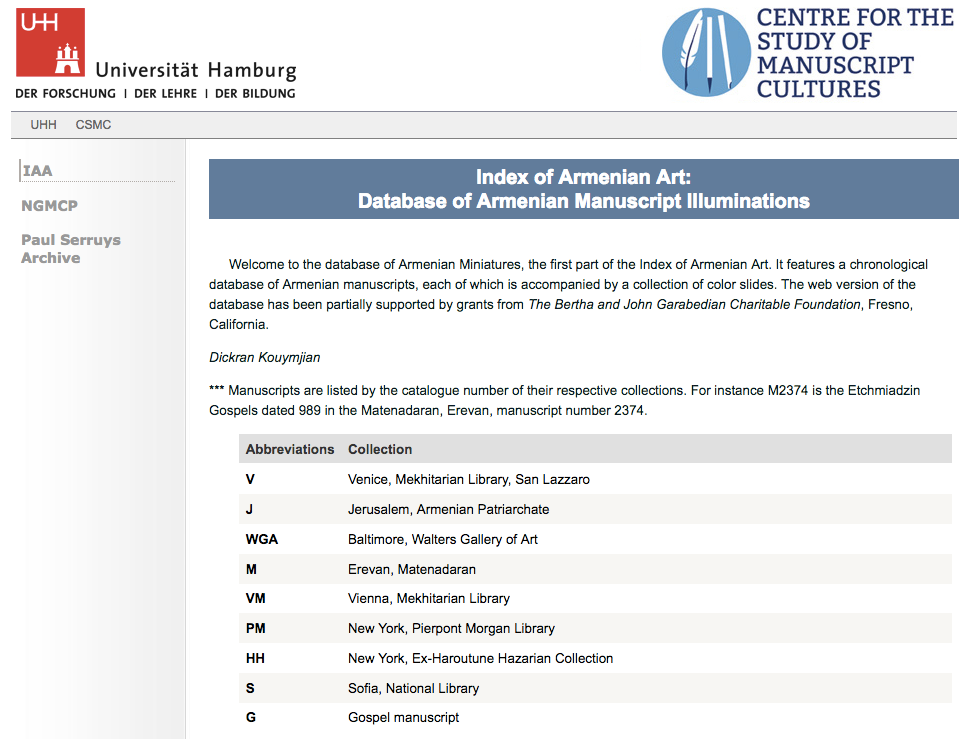 The Index of Armenian miniatures is the first part of the "Index of Armenian Art" that was developed under the direction of Dr. Dickran Kouymjian at the California State University, Fresno . The chronological database of armenian manuscripts contains also colored illustrations of the miniatures. In cooperation with the SFB 950 "Manuscript cultures in Asia, Africa und Europe of the University Hamburg, the "Database of Armenian Manuscript Illuminations" has been transfered into the publicly accessible part of the SFB-repository. In this way, the continuity and availability of the ressource can be ensured long-term. 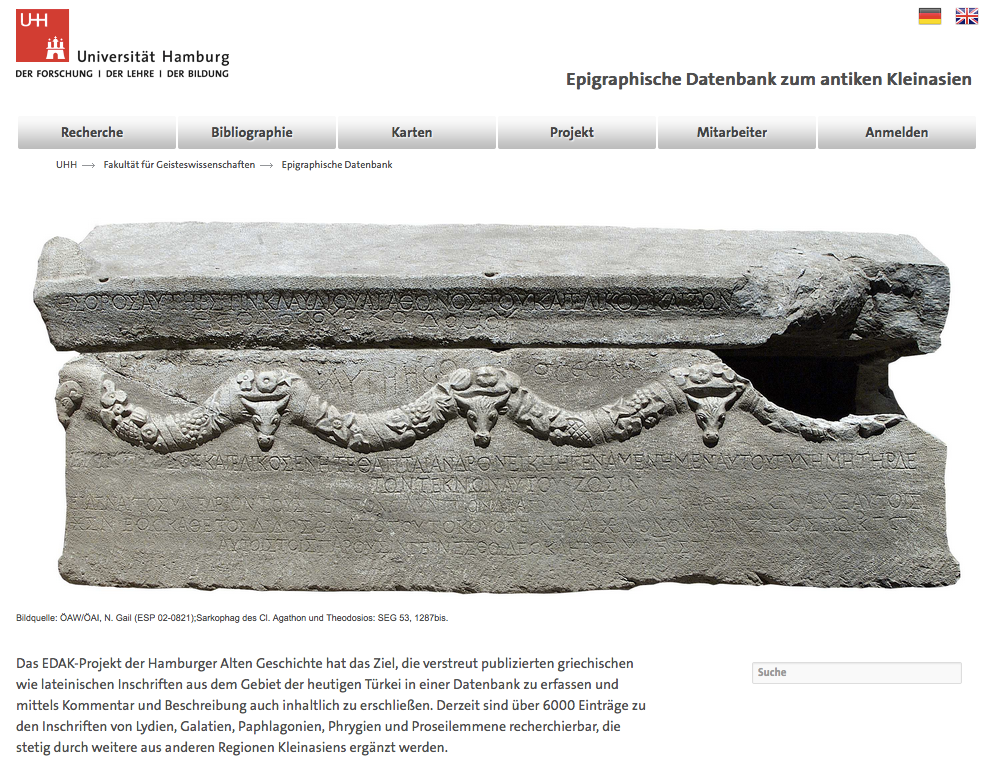 The epigraphical database on ancient anatolia contains 6256 datasets with epigraphical sources of various categories (inscriptions, laws, certificates, oracles, etc.) in Latin and Greek. The datasets can be filtered and examined by their source, quotations, type and bibliographies besides the common full-text search of the source and comments.
This data has been transferred into a sustainable structure and are available for research long-term. 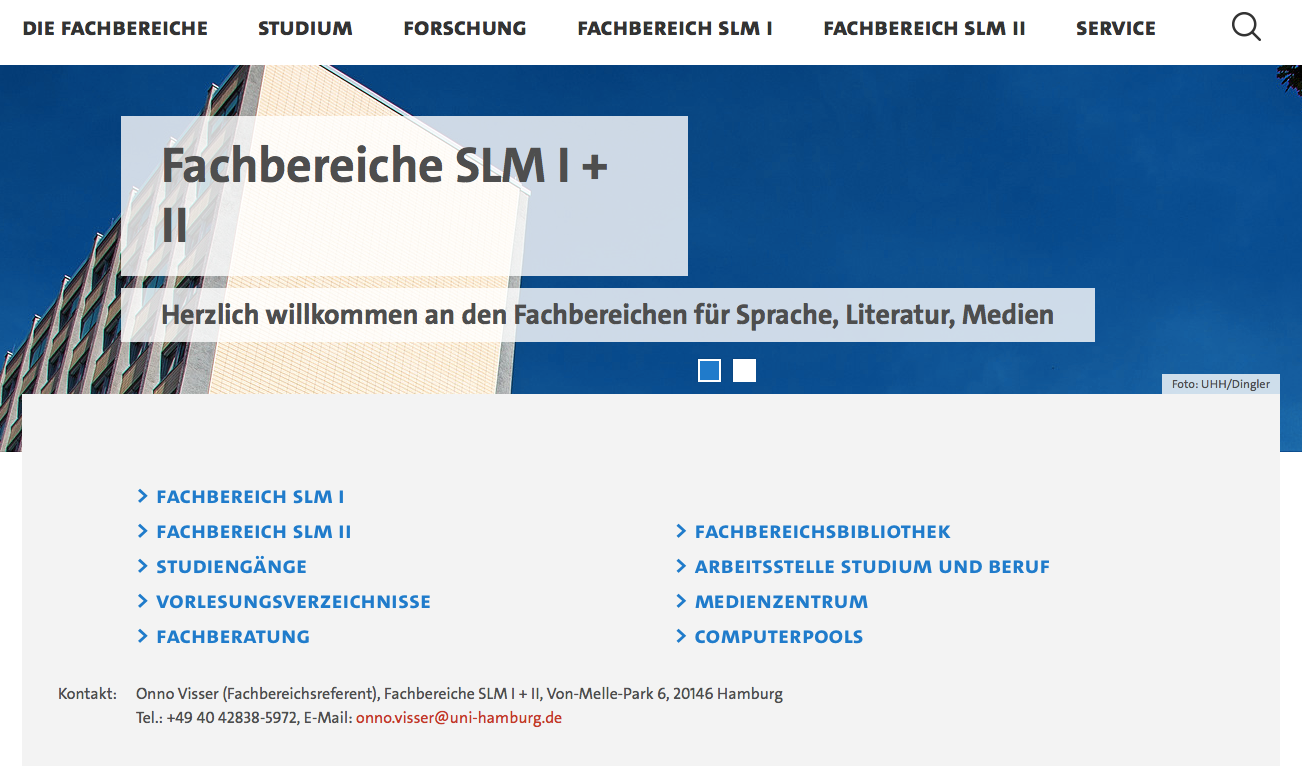 The „Hamburg Metaphor Database“ derives from a research project of the department language-, literature-, and mediasciences (Institute for romance studies). Under the direction of Birte Lönneker-Rodman and Astrid Reining a database of 434 metaphors and 1657 analyzed sentences - wich have been made available by web-request - has been developed.
Due to personnel changes, this especially purpose built application could not be permanantly operated at the RRZ.

Glossary on the History of the Medieval City 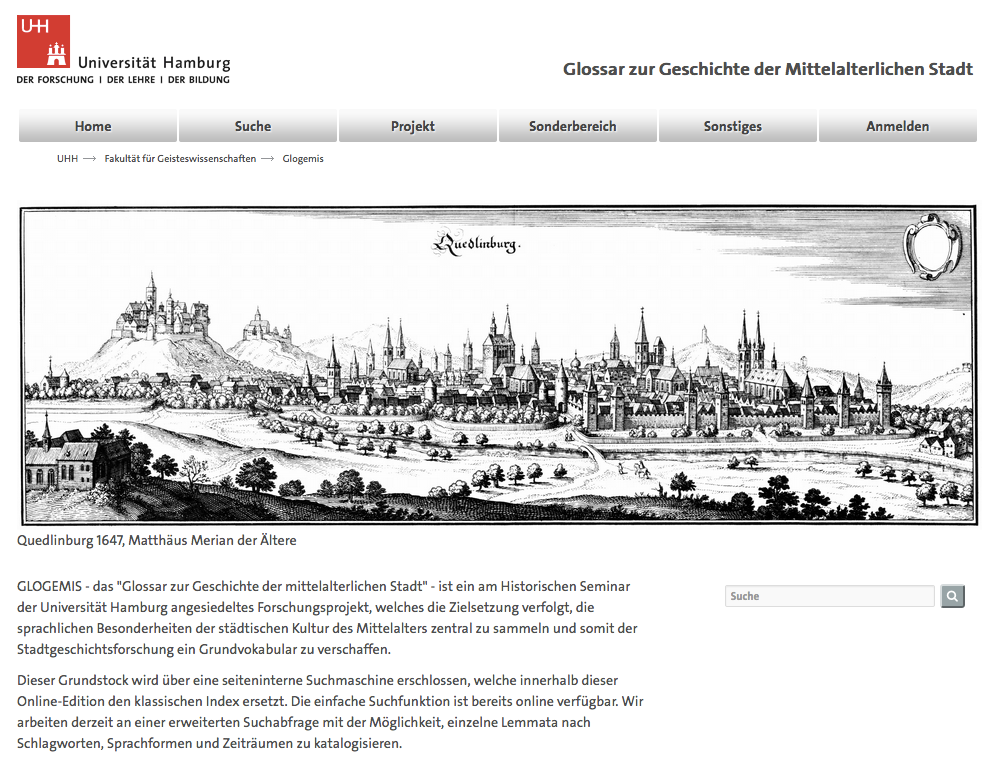 The glossary on the history of the medieval city contains explanations and translations on 6546 terms. The database is searchable by a generic full-text search or directly via the lemmata or entries. Additionaly, a simple browse-option is available.


This data has been extracted from a CMS-Application - which had to be shutted down because of security reasons - by the gwin-project and has been transferred into a sustainable repository-solution.

Prof. Dr. Hergemöller Emeritus, Work-area medieval history - Faculty of history
This is another database that had to be rescued from a discontinued off CMS-application. 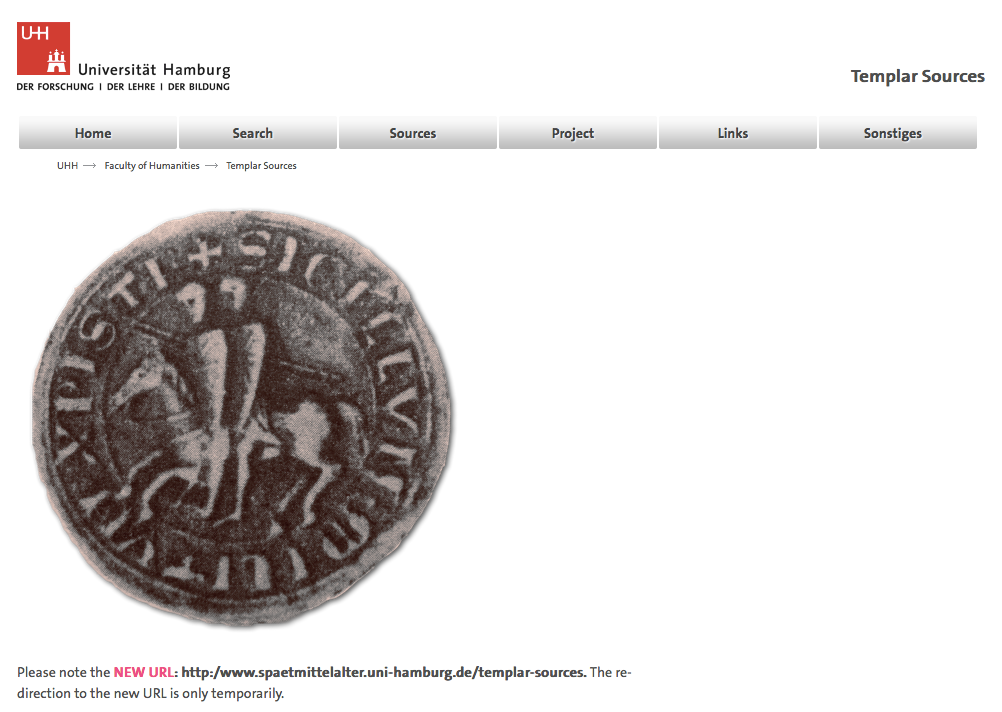 The Templar Sources involve around 100 digitalized sources dating back to 1145-1312 in Latin-language. The history of the Order of the Temple is indeed widely known, but the treatment of the sources and their general availability lag behind it. This is especially true for the here published letters and charters. This project, which was part funded by a third-party, seeks to change that. Corresponding sources are now available and searchable by years.

Within the gwin-project we were able to bring the sites technically up to date and to bring them into the layout of the University Hamburg. 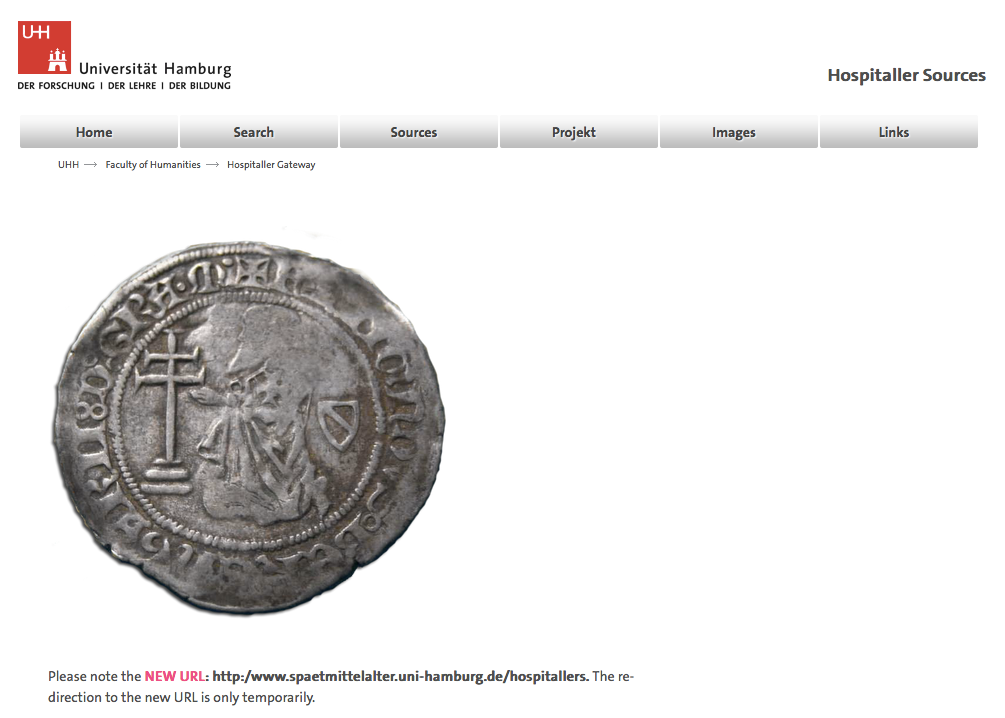 The Hospitaller Sources published 348 single sources in Latin and English which are accessible in 82 year-bars with appropriate registers and are equipped with remarks. Besides, supplementary material - like the Stabilimenta Rhodiorum militum - and links on the history of the Order of St. John in the late Middle Ages will be supplied. 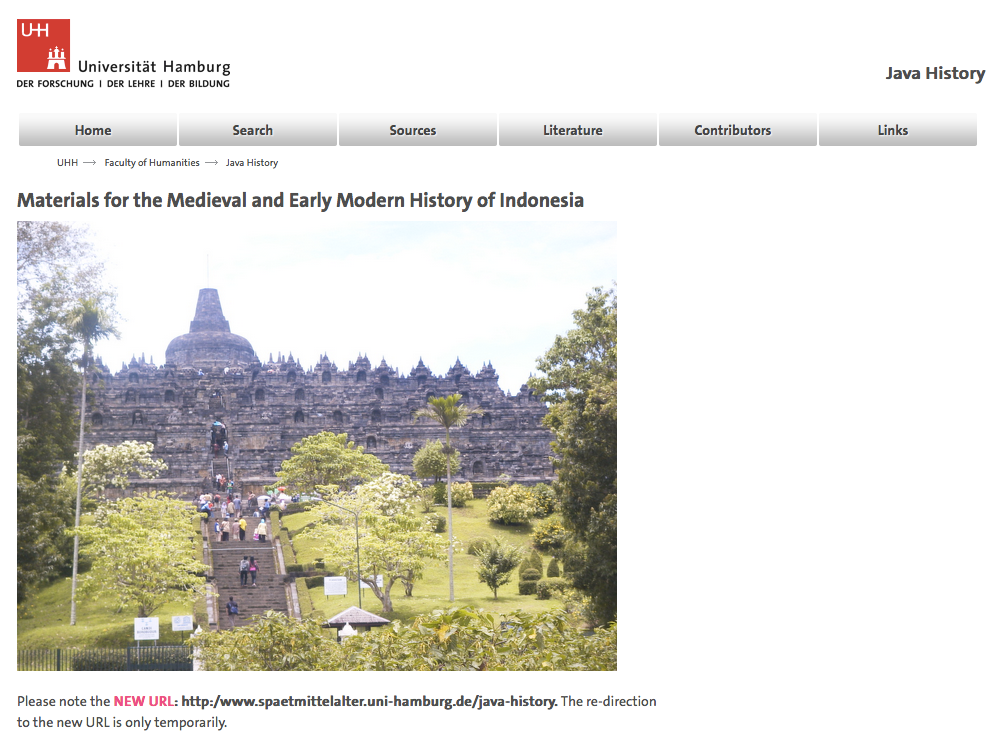 On the pages of the Java History, material and sources on the history of Java and Indonesia on to the 16th century are available. Together with the Universitas Gadjah Mada Yogyakarta these sources are continually extended and subsidized by third party funding. Currently 86 single sources and numerous supplementary material are accessible online. These pages contain map-material of the pacific and east-asian region, inscriptions and charters of the years 584-1406 as well as legal texts (Kutura Manava, 1329-1351) and numerous narratives (e.g. Nagara-Kertegame, Pararaton, Sejarah Melayu, Abu Zaid or Marco Polo). All of these sources are also available in an English parallel-translation.
139